The title refers to “Chef MOF vs. Starred Chefs.”
What is MOF (Meilleurs Ouvriers de France / Best Artisans of France)? The first competition of MOF was put into practice in 1924 to compensate and recognize the best professionals of the artisans’ manual work in the specific fields. 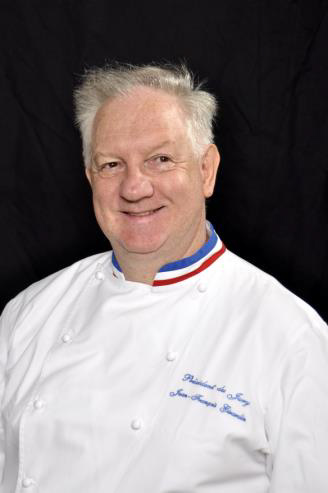 The MOF competition is organized every 3 or 4 years depending on the professional field the competitors. In total, 17 artisanal professional categories’ competition held to deliver the title of Meilleur Ouvriers de France. Each professional category may consist several sub-categories. For example, one of the subcategories under the category of restauration and hotel named cuisine-gastronomy receives the most media coverage. The laureates of chef MOF is recognizable by the embroidery of blue-white-red on the neck of the cooking jacket (source of the photo from the website www.vivrelarestauration.com). Only 8 out of 431 participants, 1.8% of the particular rate, received the title of Chef MOF on the year competition of 2015. The extremely competitive selectivité rate brings the additional professional qualification and delivers the national diploma equivalent to Bac+2 for the chefs MOF for the past many years investment. The chef MOF receives the social recognition and financial rewards.

In additional to the label of MOF, there exists a book name Guide Michelin acting as a reference book of gastronomy. Created by the tire company, the Guide Michelin offers a gastronomy book of hotel and tourism and is one of the oldest and the most famous guide books in gastronomy.